The Olive Harvest in Occupied Palestine 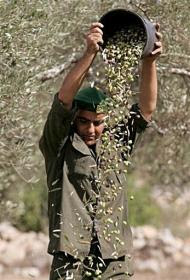 During the autumn months of each year, Palestinian olive farmers are getting ready to harvest their olive crops which are the main source of their livelihood. One would expect that this should go smoothly and without any incidents. However, this is far from the case, many Palestinians are attacked by the settlers, and they are harassed during the olive picking season for no reason.

This is appalling and there is no justification for this loutish behaviour by the occupying settlers in the . Is this the direction that Zionism is moving? As it is those settlers living in the occupied territories are also very right wing Zionists, and the justification for their hooliganism against their Palestinian inhabitants even gets support from their right wing fanatic rabbis who somehow goad them on in violence against the Palestinians.

Today, even the Security Forces turn a blind eye towards settler violence against the Palestinians and even if these hooligans are caught breaking the law (which by the way, is not enforced in the territories the way it is within the green line) they are treated very leniently and are released without much problems.

This was no less evident than during the Sukkot (Tabernacles) holiday when tens of thousands of Israelis accepted the Jewish National Fund's invitation to take their families to visit olive groves across the country. Many participated in the harvest celebrations and heard the tale of the olive tree, the symbol of peace. And as happens every year when the olive harvest begins, dozens of youths set out from the settlements and outposts to the olive groves of the to confront their Palestinian neighbors. They also threatened human rights activists who volunteered to help the harvesters and beat a photographer who came to document the Sukkot riots.

The Torah - focus of Simchat Torah - the holiday celebrating the conclusion of the annual reading cycle and its renewal, reminds the people of that they were foreigners in , and prohibits them from exploiting foreigners, orphans or widows. But enlightened religious laws like these are themselves, foreign to the spirit of the hooligans who wear large skullcaps and dare to call themselves Torah-observant Jews.

These “Torah – observant” Jews – the zealous God-fearing religious Zionists have been stealing Palestinian agricultural lands since the 1967 occupation of the . They also steal the produce of these poor Palestinian farmers. Is there any wonder why the Palestinians are not enamored of Israelis when this type of behaviour is even sanctioned by their rabbis? These rabbis have remained silent and have not even condemned the shocking behaviour of their followers. The occupation has resulted in increased violence and theft by the illegal religious settler fanatics and there is no doubt that this represents the most sinister aspect of ’s “humane occupation” as the Zionists call it. has failed in its duty to protect the Palestinian people from the hooliganism of the settlers who move around beating up Palestinians and even attacking the Israeli Security Forces who occasionally come to their (Palestinian) aid from these marauding, bestial settlers. Most of these attacks on Palestinians have occurred in Areas B and C which according to the Oslo Accords have placed the responsibility of security of the Palestinians on ’s shoulders. However, if the Palestinians were to behave in this fashion towards these settlers, the Israeli Security Forces would be out there ready to defend them. However because they are not Israelis but Palestinians, they are not entitled to the same protection as the loutish settlers.

Where are ’s religious leaders – the Rabbis who are the source of strength for the zealously observant in the occupied Palestinian lands? Silence is golden! By their silence they are also guilty of injustice by the result of the violence against the Palestinian olive harvesters.

Lately there has been an outcry because of the proposed beatification of Pope Pius xii, the reigning pope during the Hitler years. He had shown insensitivity towards the extermination of the Jewish People by Nazi Germany. He preferred to remain silent for the sake of expediency. Surely these rabbis are behaving in the same way by remaining silent while the settlers beat and abuse the Palestinian farmers while they are harvesting their crops, not to mention the theft of their lands and the total anarchy that exists in the southern Hebron Hills, Tel Rumeida and central . The Israel Police and Shin Bet security service also should not tolerate settlers' shameful attacks on olive harvesters and not only protect the settlers. 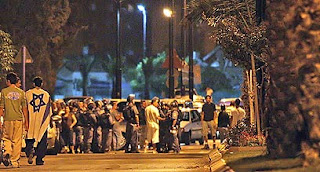 Rioting in Akko
Posted by Shimonzk at 9:23 pm 1 comment: