Now it is Libya's Turn 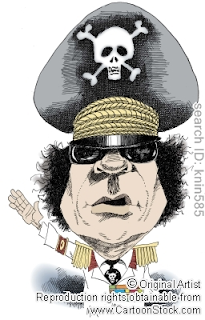 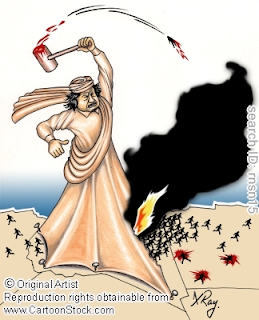 Posted by Shimonzk at 8:19 pm No comments:

The Aftermath of Mubarak Posted by Shimonzk at 9:20 pm No comments:

The End of the Mubarak Era 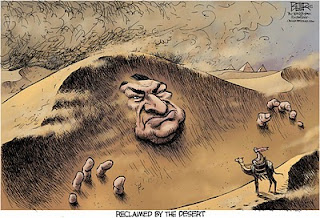 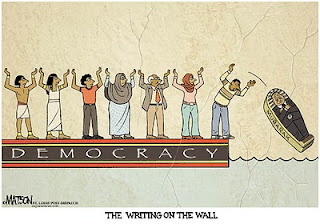 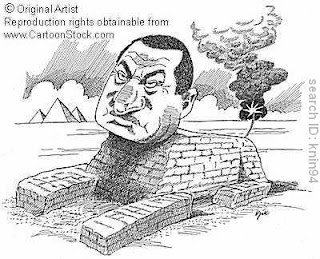 The will of the Egyptian people has been accomplished. President Hosni Mubarak has resigned. After nearly three weeks of protests and shouting of anti-Mubarak slogans, the Egyptian people achieved what they wanted in a peaceful manner. Deaths have resulted because of the actions of Mubarak's goons.
One cannot help empathizing with the Egyptian people and identifying with their fight for freedom, democracy and human rights which had been denied them under the Mubarak era and its state of emergency that had never been lifted since Mubarak came into power thirty years ago.
The Egyptian people had their say and emphasized their standpoint. The fact that they achieved this with the minimum of violence is to their credit.
Nobody can predict what the future holds for and we, in , do have some trepidation which is justified. A revolution in the Arab world including (which is a non Arab country) has ended up in replacing one dictatorship by another. In the dictatorship became Islamic in the extreme. The dictatorship of is hypocritical in its cheering of the Egyptian revolution. is no paragon of  democracy. The Ahmadinajad regime under the Ayatollahs is even worse than the Mubarak dictatorship ever was. Democracy is not tolerated there at all under any guise.
Perhaps the difference between ian revolution and is that the Mubarak dictatorship was overthrown by the Egyptian people without any foreign aid in contrast to , where the and its allies had overthrown the evil Saddam Hussein regime. At the same time, they left a chaotic situation behind with warring factions of Islamic terrorists killing innocent people at every opportunity.
The Egyptian people are mostly Sunni Muslims with a Coptic Christian minority and there is no strife amongst them. They are united in their common desire to rid their country of Mubarak, a dictator, who had no sympathy for his people's difficulties, lack of democratic rights and severe poverty as well as severe unemployment which was the plight of most of the population. The youth of was the spearhead that initiated the revolution. They had nothing to lose and everything to gain. They had no future under the autocratic Mubarak regime.
The Egyptian Army has now taken over and even Mubarak's sidekick, vice-President, Omar Suleiman, has been pushed aside. The army has reacted with restraint, and has managed to retain the respect and support of the Egyptian people. This is a good sign towards returning to order and the cessation of chaos. Despite the statements of support for democracy coming from the army, one must view this with great caution. Military rule usually ends in a military dictatorship and this would be contrary to the will of the Egyptian people. A new order of checks and balances must be introduced to prevent this from occurring and free democratic elections must be held as soon as possible so that a new constitution can be drawn up to ensure and protect the nascent democracy whose future is still very uncertain.
The situation in is uncertain with an opposition that is far from being united. The only thing that united them was ridding the country of the Mubarak dictatorship. Now that this has been achieved it remains to be seen who will replace him.
We Israelis are very close neighbors of . We have been watching with great interest the latest developments there, and we are all hoping that the peace between and will be maintained even though it is a cold peace. Maybe the departure of Mubarak will improve Egyptian-Israeli relations. I say this with cautious optimism.
does have legitimate fears as to the worst possible scenarios that could occur. The Muslim Brotherhood could possibly win in the elections and their members in this organization who have gone on record against ’s existence and the signing of the peace treaty with . On the other hand, there are moderate, pragmatic members of the Muslim Brotherhood who recognize 's right to exist and wish to maintain peace with . The support of the Egyptian people for the Muslim Brotherhood remains untested at this stage. We will be the wiser when the situation in stabilizes resulting in free and democratic elections being held. However, has so many problems and even after the elections renewal of hostilities against is unlikely.
Egypt's priorities are rebuilding its economy, creation of jobs and ensuring that human rights are not abused.

According to reports, the Muslim Brotherhood is not interested in becoming part of the new government and to date has not put up a candidate for the presidency despite the fact that they are the largest and most coherent opposition.
A rather interesting observation is that those who led the revolution are not Muslim fundamentalists but rather secular young people. There was no shouting of anti-Western or anti-Israel slogans. There may have been minority rabble rousing in this direction but it certainly was not characteristic of this revolution.
must also be prepared to accept the new situation and support the Egyptian peoples’ desire for democratic change and their fight for human rights. This is to the advantage of all the peoples in the .
Israel could also take steps in freezing the building of new settlements and work systematically to end the occupation by deeds and not pay empty lip service to the establishment of a Palestinian state which can only be established once the territories occupied in the June 1967 War are liberated from Israeli rule with territorial adjustments agreed to by both Palestinians and Israelis. This would go along way to achieving a true and lasting peace between , and the rest of the Arab world. 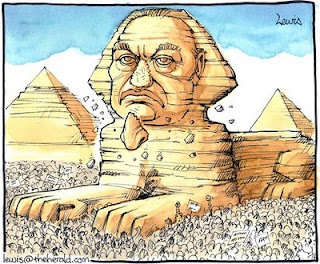 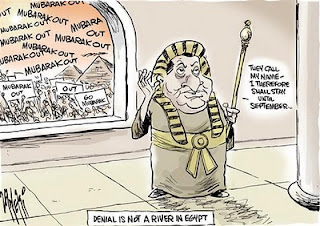 Posted by Shimonzk at 7:59 pm No comments: