Illegal Settler Arsonists and their Ilk

On Friday 10th Dec some right wing extremists associated with the settler movement went on the rampage. They decided that the best way to show their opposition to P.M.Netanyahu's so-called "settlement freeze" was by destroying a mosque in the town of Yasuf which is near .

This atrocious and despicable act of arson was condemned by most Israelis. There were even some attempts to reach a sulcha or peace between Israelis and Palestinians in the area. The head of the" peace team" was Rabbi Menachem Froman of the Tekoa settlement in the . The team even donated Qurans to the Palestinian community as a symbol of their sorrow for the settler, extremist vandalism. While the rabbi and his supporters' act was commendable, one cannot deny that the underlying cause for this arson lies in the deep rooted hate for Palestinians and for non-Jews in general. This hate stems from the education meted out to the children of settlers by right wing rabbis of the settler movement.

Only when the damage is done because of the warped and hateful religious ideology does one realize the danger of their so-called religious ideology. The damage to by these religious right wing fanatics is comparable to the hate mongering of the racist Hamas imams on the Palestinian side!

Another great disappointment is the attitude of some religious Knesset members of the right wing religious parties. They take the ancient biblical "eye for an eye, tooth for tooth" rule as a justified retribution for vandalism committed by Islam extremists against synagogues and Jewish holy places in the past. This means that in the midst of our society lurks a hidden evil that believes that the Arabs and their holy places must be destroyed. Their representatives are part of the Netanyahu government!

A sign of maturity of any nation is tolerance towards those of differing faiths. This hate for the other serves no purpose and is destructive apart from being immoral. 's response to this vandalism committed in Yasuf is commendable but not strong enough. Had it been a synagogue that was vandalized a greater effort would have been made to bring the perpetrators to justice. It is doubtful if the vandals of the lunatic fringe within the settler movement will be brought to justice. No arrests have been made at the time of writing this article.

There is no justification for vandalism committed against any holy place whether Jewish, Moslem or Christian. Religious vandals of all faiths should be brought to justice.

Within the Israeli establishment lurks another tinder box of hate within the right wing religious Zionist Movement - the Yeshivot Hesder - (institutes of religious learning where religious soldiers combine military service with Torah study).

These institutions have a religious Zionist right wing ideology and are sympathetic to the settlers residing in the occupied territories. The religious soldiers attending are exposed to the narrow world view of right wing rabbis about the importance of greater and the biblical justification of settling the entire Judea and (as they refer to the ). The ideology of these religious institutions is right wing to extreme right wing. The latter even encourage their students to refuse to obey IDF orders concerned with evacuating settlements or ensuring settlement freezes.

It does not take much imagination to realize that the fanatic right wing rabbis in their enthusiasm to instill their nationalist Zionist ideas of settling the whole with Jews and using the Torah and quotations from it to justify the expulsion of the Palestinian population. They view themselves as the messengers of God who received the exclusive right to settle the whole . The moment they delegitimize the Palestinian population the next step would be violence against them.

Many graduates from these religious institutions - yeshvot hesder - are imbued with a fanatic right wing Zionist world view that is hostile to the Palestinian population who has been living in the for generations. They dehumanize the Palestinians and believe in transfer. Many of the settlers who are graduates of these institutions are involved in vandalism against Palestinians including uprooting their olive trees and general destruction to their property. It is annoying that the perpetrators of these acts are hardly ever caught let alone being brought to justice.

fails to realize that the world condemns for its colonialism and the illegal settlers living in the occupied territories are part of the occupation. The great mistake of the Six Day War of June 1967 is the encouragement of settlers to colonize the . It makes ’s claims of not wanting to rule another people as being false.

Jerusalem - Capital of Israel and Palestine 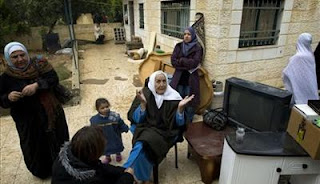 An elderly Palestinian woman gestures as she sits with her belongings in front of a disputed house in the east Jerusalem neighborhood of Sheik Jarrah, Tuesday, Nov. 3, 2009. Jewish settlers claiming ownership forced their way into a disputed house in east Jerusalem on Tuesday, using hired guards to evict an elderly Palestinian woman and tossing the belongings of the 29 other residents into the rain, witnesses said. (AP Photo/Sebastian Scheiner)

A united - referred to as the "eternal capital of " will remain a cause of disagreement between and the Palestinians until this problem is solved.

The claim that 's capital is a united city could not be further from the truth. One need not delve too deeply into ’s history and its demography to realize that is a divided city.

Even the Jewish population is divided. The ultra-Orthodox or Haredi population live in self-imposed isolation from the secular areas. They are against any form of secular activity on Shabbat. They demonstrate against the opening of parking lots and factories such as Intel who work on Shabbat. Their weapons are stones and overturning trash cans to impose their religious will by force. Their Shabbat demonstrations end in violence. Every Shabbat there is one demonstration or another that they initiate. Surely violent demonstrations are a desecration of the Sabbath, but not in ultra-Orthodox Halacha, where this is viewed as a means to achieve a “holy end” of coercing the unfaithful to Shabbat observance.

There is also the Orthodox - non-Orthodox divide and the non-recognition of observant Conservative and Reform Jews even resulting in desecration of their synagogues by Orthodox Jewish extremists occasionally.

Another indication of the fallacy of “united ” is the schism between Palestinian citizens of and Jewish citizens. Here the situation is no better. There is terrible neglect of infrastructure and services in Palestinian neighborhoods in East Jerusalem. residents are required to pay taxes like all city residents. However they do not receive the same services. The has hardly invested in improving services for Palestinian residents. No new schools, public buildings or medical clinics have been built for Palestinians. Here there is an apartheid-like situation in the treatment meted out to Jewish and Palestinian population. Most investment goes into the city's Jewish areas.

If is not a united city then it is a divided one. demographically is not Jewish. What is Jewish about the Al Aqsa Mosque, Dome of the Rock and the various Churches in this area?

The Swedish Government has now put forth a plan to make Jerusalem the capital of both Israel and Palestine. It is a plan that recognizes as a divided city. It is divided between Palestinians and Israelis and even internally divided amongst the Jews. cannot be viewed as a united city apart from the sentiments of its unity as expressed by various Israeli governments over the years. Sentiments never express a reality.

has always been and always remains a divided city. Surely the time has come to realize this reality. It is divided culturally, politically, ethnically and nationally. The greatest division is between Palestinians and Israelis. This is the core of the Palestinian - Israeli Conflict. This should be the starting point of renewed negotiations not the end. The most dangerous attitude is the attitude based on religious sentiment rather than on a political reality. This applies to both Israelis and Palestinians.

These days many people in are watching the news. They are beside themselves not necessarily with joy. The reason - P.M. Benjamin Netanyahu has made a "dramatic” announcement that he will freeze settlements in the occupied territories over a period of ten months as a gesture to get peace negotiations started with the Palestinians.

It is a tactical move to satisfy the yet far short of a genuine freeze of settlement activity. It is not surprising that the Palestinian Authority, under Mahmoud Abbas, is not satisfied. The fact that extreme right wingers such as Ze’ev (Benny) Begin and Bogey Ayalon - support the "freeze" must raise suspicions that the freeze is not genuine nor is the will for reaching an agreement with the Palestinians. The establishment of settlements is such a strong part of Likud ideology that it would be unthinkable for the Likud coalition to change its policy towards settlement in the occupied territories.

What is not covered by the "freeze" is the continuation of building operations in which is considered to be Israeli and not open to negotiation. The Palestinians consider East Jerusalem as the capital of their future state and that the settlement freeze should include as well. In any case, the settlement freeze will exist in name only and the building cessations will be unnoticed. It is highly unlikely that the so-called freeze will be observed in any case. Apart from cosmetic freezes of insignificant outposts, 's government has no intention of freezing settlements. If it did, the extreme right wing factions in the Likud would not support it.

Of course it will be argued that even if there was a genuine freeze of settlement building the Palestinians would not accept it as a prerequisite for getting negotiations started again. The Palestinians would only recognize freezing of building operations if it was genuine and included . The entire world now accepts the fact that East Jerusalem will eventually be the capital of the when established. The right wing, religious Zionist settler movements, with its racist rabbinical mentors, believes in transferring the Palestinian population out of the occupied territories to neighbouring Arab States.

On the other hand, if settlement building in the occupied territories continues, it will be at the expense of the future Palestinian state. It will render the chance of its establishment impossible. This brings back the idea of a binational state and all that it entails. If settlement activity in the occupied territories carries on which is the will of the right wing in , they must also be held accountable for the failure of the two-state solution which has the support of most of the free world.

The freezing of settlements in the occupied territories must be seen for what it really is - a sop to President Obama! Despite this, the right wing Zionist settler movement demonstrates against the phony freeze. At the head of the protests are the pseudo Kahanist racists such as Ittamar ben Gvir, whose visage seems to pop up at every right wing extremist demonstration .This kippa and tzitzit cladded protégé of the late Rabbi Meir Kahana is a religious extremist (I still have memories of Ben Gvir ripping off the badges from late P.M. Rabin's car two weeks before his assassination.)

The moratorium on settlements has other ramifications. Violence of right wing settlers against the Palestinians is a strong possibility.

Posted by Shimonzk at 8:28 pm No comments:

The European Union
Is about to
Declare Jerusalem
The capital of
Two states.

For Israel,
And for a future
Of peace,
That is
A good thing –
Indeed a
very good thing!