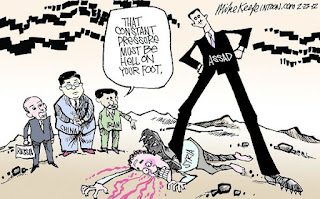 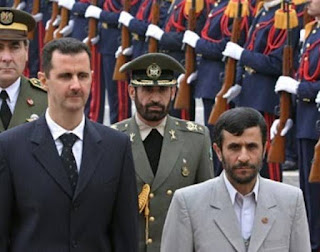 The Iranian threat is very real. Can one afford to be skeptical about the Iranian threat or even indifferent? Wars begin with threats.
The unrest in the Arab countries has given rise to instability in the as well as uncertainty. In , the moderate Islamist Ennahda Party was elected. It seems to be pragmatic. In , the situation is more complex and the military still seem to be at the helm despite the elections. The Muslim Brotherhood and its Islamist coalition partners - the Salafis - have majority support. It seems that the revolution in has not achieved the desired goals of human rights and democracy as intended. People who opposed the corrupt Mubarak regime and were in the forefront of the revolution are under threat.
is in turmoil despite the end of the cruel Qaddafi era with warring militias making ungovernable.
is still being ruled by the cruel dictatorship of Bashar al Assad whose loyal soldiers are massacring thousands of Syrians without mercy. The Syrian opposition to Assad the tyrant is prepared to sacrifice their lives. The Assad regime is getting support from who is also supporting Hamas in as well as Hezbollah in . It is still not known how widespread the Iranian influence is in the occupied .
Despite the boycott of because of its disregard of UN resolutions to halt its nuclear programs, the evil President Ahmadinajad continues to disregard these resolutions.
The instability in the seems to create an environment for possible Iranian domination. A paradoxical situation may occur whereby , and the Arab nations are under the threat of the megalomaniac Ahmadinajad. The common danger to and her neighbors needs reassessment and new alliances must be formed to oppose this threat as effectively as possible.
Ahmadinajad's does not have Palestinian interests at heart. It has formed alliances with the evil Assad regime of and its various proxies such as Hezbollah to dominate the by suppressing Iranian opposition brutally. The majority of Iranians oppose their brutal leadership and attempts were made two years ago to overthrow the Ahmadinajad regime. The brutal oppression of the Iranian people continues unabated
Ahmadinajad is taking advantage of the instability in the Arab world in order to create a situation of "divide and rule" in the Middle East and is using 's evil regime, Hezbollah in and probably even Hamas in . The latter is Sunni and it seems odd that Hamas is accepting Iranian aid in order to destroy .
This further proves that Ahmadinajad continues to provoke tensions and take advantage of the Israeli-Palestinian conflict to achieve his goal of domination of the . It is not in the interests of the Palestinians to kow-tow to Ahmadinajad's whims. He has often stated his desire to annihilate and his nuclear programme is intended for that purpose as well as dominating the .
One can assume that all the people of the are under threat of Ahmadinajad's megalomania. Nobody is immune from the common danger to which we are all exposed. Nuclear bombs and the resulting fallout will destroy , and neighbouring Arab states. Regarding Ahmadinajad as an ally of the Palestinians is naïve and the consequences of annihilation of Israelis and Palestinians is not as remote as many Palestinian pundits hope to believe.
Whether or the should attack is a contentious issue and there does not seem to be any straight answer apart from "all options remaining on the table".
If a decision is taken to carry out pin-point accurate attacks on Iranian nuclear facilities, the safety of the Iranian people must be guaranteed. After all, the evil Ahmadinajad regime was thrust on them by force and electoral fraud.
However one views an attack on 's nuclear facilities, it is fraught with many risks and could only be achieved by a well coordinated attack on all the nuclear sites at the same time. Surprise is an important element here.
The success of such an operation is dependent on the support of the Arab world, including and the Palestinians.
The danger of with the nuclear bomb capability is obvious. It would be prudent for all the nations of the to lay down their differences and unite to prevent Ahmadinajad creating a nuclear disaster.
Sanctions against Iranian interests all over the world are important but it is unlikely that it will succeed. There will always be countries such as and that oppose sanctions. They will remain Ahmadinajad’s supporters.
The Israeli occupation of must not be used as a distraction in the neutralization of 's potential to develop a nuclear device.
There are signs that Hamas is having second thoughts about Ahmadinajad and his ally Bashar el Assad of . The magnitude of the atrocities committed by against its people is horrendous. While not belittling the Israeli occupation, the tyranny of and is not comparable. The attitude of the European Union and for that matter the is not decisive enough to prevent the blood bath occurring in .
A terrible human tragedy is occurring in and 's attitude towards this cannot be one of indifference. The murder of innocent Syrians by the evil Assad regime must be condemned in the strongest possible terms. Both tyrants need to be removed from power and tried at the International Court of Justice in for atrocities against humanity.

Posted by Shimonzk at 9:38 pm No comments:

The Art of Obfuscation

Image via Wikipedia
The Arab world is in the midst of great turmoil because of radical changes. The Arab people, after generations of suffering under megalomanic, cruel dictatorships, have decided to revolt, ushering changes that will create a different Arab world. It remains to be seen the direction that it will go.


The buds of new Arab governments in Tunisia, and Egypt are starting to show after their first democratic elections in generations. There are signs that religious Muslim party coalitions will be taking over post-revolution Tunisia and Egypt in the midst of severe turmoil. The direction of Libya is still unclear. The secularists, who were the initiators of the revolutions, will be forced off the scene. These states are in the midst of confusion and the aims of the "Arab Spring" in the direction of democracy and economic stability seems very confused and unclear. In Syria, the uprising has become violent with President Bashar el Assad's forces massacring hundreds of Syrians daily. The attempt to overthrow the Assad regime is bloody and the opposition is being oppressed ruthlessly.


The newly elected governments have many problems to address. If the Arab electorate in the various countries undergoing radical changes does not succeed in creating economic stability, alleviating severe unemployment and the resulting poverty, very little will be achieved in assuring a successful transition towards democracy, human rights and dignity. The challenges are great and a successful outcome is far from being realized at this stage. There is seething dissatisfaction and the road to orderly change will remain evasive for an indefinite period.


The biggest fear by far for the West is whether the emerging new governments in Tunisia, Egypt and Libya will be pragmatic in its dealings with the non-Moslem world. Many questions remain unanswered. The hope of the non-Moslem world is that pragmatism will take preference over religious extremism, and its severe restraints on the citizens under their rule, will not be an obstacle to peace or a solution to the Israeli-Palestinian Conflict.


In Israel, the attitudes towards the sweeping changes in the Arab world remain unclear. The present government seems to be obsessed with Iran's nuclear ability and its danger to Israel. There is much hype in the media about how long it will take Iran to develop its nuclear ability to threaten Israel. There is debate on whether Israel should attack Iran's nuclear facilities with or without US support. This could be a side issue to take the pressure off Israel in negotiating a peace treaty with the Palestinians. While the Iranian nuclear threat is being debated, Israel continues to build illegal settlements in the occupied territories.


Salaam Fayyad, the PM of the Palestinians, has stated that President Ahmadinajad of Iran is damaging the Palestinian cause by his bluster and rhetoric. He knows that the Iranian nuclear threat is no less dangerous for the Palestinians as it is for Israel. Apart from that Ahmadinajad's vision is clear - domination of the Middle East with Shiite Islam ruling over the Sunnis who are the majority. There is no democracy in Iran and Syria (a cruel massacre is going on there against Syrian protesters of the cruel Assad regime), Iran's close ally.


Israel is keeping a low profile in its attitude towards the sweeping changes taking place in the Arab world. It is consolidating its control over Palestinian lands and building illegal settlements to make the two-state solution to the conflict unattainable. PM Netanyahu speaks about supporting a two-state solution while his right wing coalition is doing everything to torpedo it. The art of Netanyahu Government obfuscation has reached new heights. Netanyahu talks about peace and a two-state solution and blames the Palestinian side for the deadlock.


Obfuscation is not only in the Israeli-Palestinian Conflict but also in the way problems in the Israeli workplace are handled. Procrastination and ignoring genuine grievances and injustices is an art well-developed in Israel. While obfuscation in the Arab world is a result of uncertainties because of dramatic changes, in Israel it is directed at its citizens where intentional obfuscation is the name of the game. The purpose - industrial quiet accompanied by crude capitalist greed.


When one does not agree with the right wing coalition who is insensitive to citizen's grievances, the dissatisfaction remains simmering under the surface without any solution being found. Organized strikes are less effective today than in the past.


Inefficient people in senior positions in government departments who have a history of abusing employees and slandering them seem to be immune from being dismissed. This is common practice. It is hardly surprising when the "only democracy in the Middle East" is a democracy for cartels in high places. The government departments are filled with inefficient bureaucratic technocrats whose sensitivity for the treatment of employees in various sectors is almost non-existent. In Israel there is no legal address for employees who have suffered verbal abuse, slander and libel unless it is a newspaper scoop. Good manners are not a well known quality amongst many Israelis who have authority whether it is employer – employee relations or behaviour towards Palestinians when it comes to negotiations. The arrogance seems to seep through. Obfuscation is an art well honed.