The Massacres in Syria and Iran 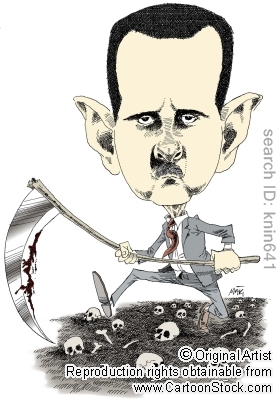 The turmoil in the Arab World, starting in Tunisia followed by Egypt, Libya, Yemen and Syria in the strong desire of the people to achieve democracy, justice equality and human rights, has left a big question mark. The aims of achieving these values are inconclusive.
's President Bashar el Assad has proved him a ruthless, murderous dictator and, like Nero of ancient , he fiddles while , and other Syrian cities burn with rivers of blood flowing in the streets. His ruthless, cruel army stops at nothing, killing innocent people, men, woman and children and torturing suspects. His henchman connects electrodes to the ears, genitals, and fingers of his suspects before torturing them to death. He has murdered close to 10 000 Syrians and the numbers are still rising daily. The world remains uncomfortably silent with and vetoing all resolutions passed by the UN in trying to stop the violence. Assad needs to be dealt with in the way dealt with Qaddafi.

At the same time this evil beast and his wife, Asma, lead a good lifestyle, shopping in at Harrods and in as if life goes on as normal in . The Syrian Army is not the Egyptian Army that sided with the demonstrators aiding the downfall of Mubarak. While some Syrian soldiers have deserted to join the Syrian demonstrators, the core of the Syrian Army remains intact.
is receiving Ahmadinajad's support and as Assad succeeds to oppress his people he strengthens 's Ayatollah - Ahmadinajad dictatorship.
Ahmadinajad has even advised Assad by declaring that he should shift the blame on 's occupation of the Palestinians and push for 's destruction. This would lessen the heat on his leadership and serve to unite the Syrian people against .
As Assad reconsolidates his power ruthlessly he also strengthens Ahmadinajad.
Meanwhile is pumping weapons into rearming Islamist extremist terror groups such as Islamic Jihad firing volleys of missiles into southern . The old mantras of freeing the Palestinians from Israeli occupation and the destruction of "the Zionist entity" is still well entrenched in the minds of the Hamas leadership in .
The atrocities committed by and towards their own citizens’ make the Israeli occupation a paradise for the Palestinians in comparison. This does not mean that I support the occupation. The contrary is true. However we must place these scenarios in proportion to 's treatment of the Palestinians which should never be immune from condemnation.
and are close allies today with 's Recep Tayyip Erdogan sitting on the fence. He has also been making hostile statements against Israel and at the same time sheltering Syrian refugees from the cruel, ruthless Assad regime. Erdogan's role is two faced and his relationship with the Ahmadinajad regime remains unclear.
An attack on 's nuclear facilities by probably will not occur despite Netanyahu's saber rattling. The would not encourage it despite paying lip service to 's right to defend itself.
The trend is to view 's nuclear programme as an international problem and not 's alone despite 's proximity to . The Arab world, including the Palestinians, is under threat if develops a nuclear bomb and this could initiate a nuclear race for the bomb in the which is a threat to its entire people.
Destruction of 's nuclear facilities should be a coordinated attack by NATO with the and providing the intelligence for such a target.
In view of the common danger that all countries of the Middle East, including and the Palestinians, face from a nuclear Iranian bomb, we must set aside our mantras and unite to prevent from dominating the . The Palestinian leaders must not allow to try to smuggle weapons into or . They will simply be porns in their game of domination. Their quest is to replace the Israeli occupation by the Iranian occupation which will be far worse. Ahmadinajad is no pundit for human rights and nor is his ally, Bashar el Assad. Priorities must be reevaluated as to what is in the interests of all peoples of the .
The rockets fired into from have achieved nothing except more deaths and destruction on both sides. ’s “Iron Dome” missiles had proved a success in preventing Palestinian terrorist action against Israelis in the south. is using this as a digression in the hope of saving the evil Assad regime in its (’s) desire to dominate the . This will never be a movement towards an independent Palestinian state - certainly not under the patronage of the evil Ahmadinajad regime and its ally Bashar el Assad. Hamas is in danger of falling into that trap. The result will be more Palestinian suffering as if they are not suffering enough already under Hamas dictatorship.
The fight for a democratic and will be a long, cruel battle as these two evil tyrants are deeply entrenched. Another unknown element is the strength of Islamist extremism in these two countries that could also be an obstacle in achieving human rights, justice and dignity. Iranian domination of would turn the Palestinian dream of an independent Palestinian state into a nightmare with ruthless killings of those who oppose Iranian domination or occupation.

Posted by Shimonzk at 8:48 pm No comments: