This book is an excellent read with a very humane approach towards the solving of the tragic Palestinian-Israeli conflict that to this day remains unsolved.  Gershon is a remarkable person in that, despite all the adversities in trying to solve this conflict, he remains determined that a solution can be found. His optimism, despite the reality of the situation and the many dents that the peace process has received leading many of us to complete despair and disillusionment, remains intact. 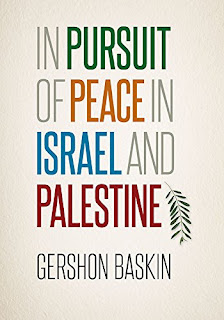 Gershon may appear naive in his approach to peace-making on the first impression, but he does manage to allay that impression as one reads this book. He has had more experience on a personal level talking to many members of the Palestinian Authority than most Israeli negotiators have over the years. He has made personal friendships with many of the Palestinian leaders and this somehow has filled him with optimism that peace is possible. He writes about his experiences and how he became involved in peacemaking even though it is really on unofficial bases.

Gershon shows tremendous sensitivity to Palestinian suffering, and at the same time, is capable of being fair and understanding of the tremendous difficulties that Israel is also facing because of Palestinian terrorist activity against Israel causing loss of life and injury to innocent people. Gershon has also written much about his personal involvement in bringing the two sides to the negotiating table.

While reading this book and the various peace plan outlines he has been involved in drawing up, I somehow got the impression that he was largely ignored by the present Netanyahu Government. PM Netanyahu, despite Gershon's attempts to seek an appointment with him, was always ignored, which is a great pity.

According to Gershon, the book is not supposed to be a history of the peace process but somehow it is from his own perspective. His ideas on a peace plan in the final chapters of the book make great sense and are really fair and reasonable. The gap to even get started on any peace negotiations is very wide as to seem to many unbridgeable.

Unfortunately, today there is no peace partner on either side of the great divide between Israel and the Palestinians in order to get the peace process restarted and a stalemate remains.

This book is really an interesting read and certainly recommended to readers, who are interested in the Israeli-Palestinian conflict and its solution. It is certainly a great read by a well-informed, dedicated and experienced peacemaker.