The Israeli Elections 2015 with Foregone Predictions? 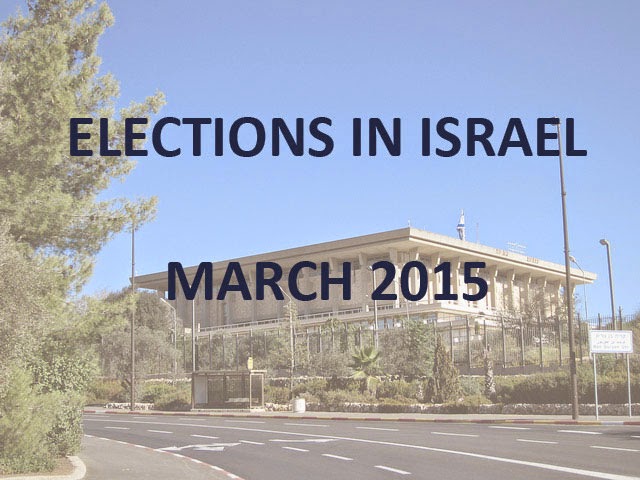 All kinds of video clips - especially from the right wing have gone viral. These clips are bordering on the humorous as well as attacking those on the left wing of the political spectrum. The problem is that the right wing, especially the settler leadership in the occupied territories, are using Nazi tactics to dehumanize the left wing, who do not hold right wing, religious, Zionist views that oppose the occupation.

The upcoming general election is the most aggressive, filthiest election campaign in ’s history. While all election campaigns in are lively and aggressive electioneering is dominant, new lows have been reached in this campaign. The use of character assassination tactics does not add to fair publicity and the important issues that need to be addressed.

The hedonistic lifestyle of PM Binyamin (Bibi) Netanyahu and his wife have been well described in the State Comptroller’s Report,  which was published a month before the election date. This has created grist to the mill of those opposing Netanyahu as being re-elected as Prime Minister. Whether it will influence the outcome, remains to be seen. Bibi is surrounded by a group of very loyal Likud Party hacks that seek every opportunity to “whitewash” Bibi on TV, internet and in the press. They are in denial and claim that this Report is part of an organized “smear campaign” against Bibi and the Likud. Naturally they accuse the left of carrying out this smear campaign, whether it is their extravagant living, Sarah Netanyahu pocketing bottle-deposit money as well as exploiting the staff in the Prime Minister’s residence and private homes. Likud will not win an absolute majority but they will win a mandate or two more than the left of center Zionist Camp. The Israeli Electorate are moving towards the right and they will support center to right of center political parties that will be the natural coalition partners with the Likud.

While the Comptroller’s Report is on the way to be the basis of a criminal investigation into the misuse of state funds by the Netanyahu family and is an embarrassment to Netanyahu, it will not affect the right wing outcome of the elections. Islamophobia and racism against Arabs (which unfortunately is on the increase in ) is a strong factor in influencing the final election results.

The Bayit Yehudi Party (Jewish Home Party) under Naftali Bennett’s leadership have come out with shocking statements in their election campaign, accusing the left of not having learn’t the lessons of Late PM Yitzhak Rabin’s assassination on November 5th 1995. What Lessons? This is the same as saying that the Zionists are responsible for ISIS! The assassin, Yigal Amir, who shot Yitzhak Rabin on that fateful night (I was present at that Peace Assembly when it occurred) came from the extreme right wing camp. He was sentenced to life imprisonment. According to reports, Yigal Amir and his family are supporters of Bennett and his Bayit Hayehudi Party. So which pot is calling the kettle black? Naftali Bennett has also been accusing the left of being traitors to and inciting his supporters against them. Such hypocrisy!!! The criticism that I can make is the portrayal of Naftali Bennett as a Nazi. This is shocking and to be condemned in the strongest terms no less. It is an example of another low to which this election campaign has reached.

The Zionist Camp, even it wins a mandate or two more than the Likud will have a more difficult time than the Likud in forming a coalition government for the reasons already mentioned. The balance of power remains in the hands of the Joint Arab List that according to the latest polls will be the third largest party. The raising of the electoral threshold of the political parties has forced the Arab parties to unite creating a considerable political force that cannot be ignored when it comes to coalition building, especially by the left of center if the President approaches them to form the next government.

If the Joint Arab List is considered a potential partner in a left of center government coalition, they will have to agree to a common denominator that is acceptable to the Zionist Camp, if not, they will have to share the responsibility of the Likud being entrusted with forming the next coalition that will leave them in the opposition. If the Joint Arab List and Meretz were to form a common list, the chances of a change of government would have been increased. This list would definitely be a very strong political force which would influence a new original coalition deal that would be very interesting as well as challenging old outdated ideologies and be more representative of all Israel's citizens. This could also leave an option open for religious parties to join if they so desire. Unfortunately the chance of this happening is very remote if not impossible with the present mindset in the Israeli Electorate.

As the various parties gear up to attack each other on populist matters, the polls will show various minor trends. The Netanyahu Likud coalition was unwieldy with an incapability to govern. Yair Lapid, the ex-Finance Minister in this coalition, claims that the reforms that he wished to institute did not even begin as his hands were tied by PM Netanyahu, with whom he had great differences. It is doubtful, with his inexperience in economic and financial matters he would have succeeded anyway.

The election propaganda has reached a new low with the Likud and Zionist Camp accusing each other of getting funds illegally from various tycoons to finance their electoral campaigns.

The electoral system in is flawed and the results of the elections after 17th March, 2015 will be inconclusive. No political party will get an absolute majority after the elections. The coalition negotiations after the elections will be the usual déjà vu. According to the latest opinionpolls, the right wing Likud has one or two seats more than the center left -The Zionist Camp (Labor – Tnua). We must bear in mind that the majority of the Israeli Electorate is right wing. This means that as Election Day draws closer, many Israelis will vote for many shades of right wing parties This includes the Haredi Ultra-Orthodox) Parties such as Shas and Torah Judaism Party, Naftali Bennet’s Bayit Hayehudi Party, which is even more right wing than the Likud.

The Zionist Camp under Isaac Herzog and Tzippi Livni does not stand a chance of winning the elections. The Israeli Electorate wants a change but when it comes to the push, they will not allow anything that is associated with the mild left of center to replace a Likud Coalition. Better the devil you do know than the devil you do not know! Electoral results have been a disappointment for many years and government coalitions of compromise will become more complex, leaving 's citizens very disappointed and frustrated the day after.

If, by some miracle, the two major parties, Likud and Zionist Camp, receive an equal number of mandates, there is a chance that both parties will form a coalition, pulling in other right wing parties such as Bayit Hayehudi, Haredi Parties, Yisrael Beteinu (despite many of its members under police investigation for bribery and corruption), Moshe Kahlon's Kolanu and possibly Yair Lapid’sYesh Atid. After elections, parties that were non-supportive of Netanyahu or even against him will become potential coalition partners. Labor and Likud have formed coalition governments in the past and the possibility of this happening again cannot be ruled out.

After close-call elections, there is a tendency for the two large opposing parties to reiterate that "the nation has voted for the Zionist Camp and Likud, giving them a total draw, therefore supporting a coalition of both parties". A coalition of these two parties may please many voters. This coalition, if it is formed, will be a lame-duck government! No reforms will occur and the coalition will be hampered by bickering and an inability to make bold decisions in the economic spheres and, no less important, negotiating peace with the Palestinians.

The parties that will not join this coalition will be the Joint Arab List (Balad, Hadash, Ram-Tal) and Meretz. Both parties have stated this clearly. Other small parties leaning towards the right may or may not join this coalition, depending on the coalition agreements that the two major parties – Likud and Zionist Camp will work out. This will also take a few months and will involve a caretaker government ruling until the formation of a new (or pseudo-old) coalition.

Unfortunately, the Palestinian leadership is hampered by all kinds of fantasies that prevent them from even embarking on a move towards negotiations with . The Palestinian Authority, under Mahmoud` Abbas, is frustrated because of Hamas breathing down their necks and gaining more support in . Hamas and the PA are still in a shaky unity government, peppered with unrealistic fantasies that are so much part of their psyche. The dreams of  an IS-Hamas Caliphate, which could take over the Israeli occupied West Bank, presents a very serious problem to the establishment of a future Palestinian state, despite Palestinian denials of this not happening. In the volatile , including the Palestinian fight for an independent state, any scenario is possible including the worst. The Hamas fantasies of ’s total destruction are “grist to the mill” of the right wing. The Israeli left is viewed by the right as being treacherous and anti-Zionist despite their strong defensive denials. The inherent racism of the Israeli right and religious right wing is also a strong catalyst that delegitimizes left wing parties such as Meretz as well as the Joint Arab List.

Despite these uncertain scenarios, must be more amenable to new, imaginative ideas towards negotiating a peace settlement with the Palestinians. At present, the Netanyahu Government has not even presented any form of plan for a future negotiated settlement.

The Palestinian terrorist attacks against Israelis, as well as Operation Protective Edge, have made the Israeli Electorate more right wing in their voting patterns. PM Netanyahu is viewed by many as being strong on security while the left are seen as weak and soft on terror. The Israeli left wing parties such as Meretz will be forced into the margins of influence in Israeli politics. The Joint Arab List will probably be a political force to be reckoned. The Zionist Camp will not take them into the coalition if they win for fear of upsetting the “Zionist apple cart”. Both the center right and center left will do their utmost to disregard the Joint Arab List, who will probably be the fourth biggest political party in the Knesset after the elections.

The Joint Arab List is composed of differing ideological opinions ranging from Religious Islam to secular. It remains to be seen whether this party will be remain united after the elections or will disintegrate into the various political parties of which it is composed.