Peace between Israel and the Palestinians

It is at times like these, when there is a stalemate in the talks between Israel, Palestinians and the wider Arab world that people on both sides become despondent. When this situation occurs, the Israeli Government digs its heels into the ground and does nothing. Both sides seek ways of avoiding each other in order to achieve peace. The demand that there be no preconditions is unrealistic, when there are preconditions that are so ingrained on both sides. The divide is so great and the motivation for negotiating a peace settlement is filled with excuses to justify why the two sides are unwilling to meet.

If we look around us and see what is happening in Syria, the evil Assad regime  carries on murdering thousands of innocent Syrians.100 000 Syrians have been massacred and there is no sign of it abating.

We in Israel, are sitting on the sidelines detesting the evil Assad regime and its alliance with the terrorist Shiite Hezbollah movement under Sheikh Hassan Nasrallah, who sits in his bunker making demagogic, warlike speeches against Israel. There is also the rebel opposition to Assad who are also no paragons of virtue. The opposition itself is divided in its goals and is splintered into many groups. It is composed of extremist Jihadi groups such as Salafis, Al Qaeda and dissident groups with the destruction of Syria and its people as a goal. Even among the rebel groups there does not seem to be a leader that can take over from Assad. The Putin regime of Russia is complicating the issue by intending to supply S 300 missiles to the Assad regime. Putin's excuse - he intends to carry out agreements with Assad that Russia had already signed.

The UN does not seem to be involved much in condemning the massacres in Syria with innocent Syrian people being caught in the crossfire between the Assad regime and the rebels who are no less cruel and indifferent to their plight. A serious refugee problem has been created as many Syrians have fled to Jordan, Turkey and even attempts to enter Israel.

What we see is an amorphous band of murderous bandits on both sides pillaging, looting, raping and killing innocent people. Something went very wrong with the revolution in Syria. Shiites against Sunnis, rich against poor, tribe against tribe, seeking revenge against the Assad regime which has no intention of establishing human rights, democracy or rebuilding Syria into a country where a democratic parliament replaces the Assad tyranny.

Whenever a situation seems hopeless in our part of the world, the importance of seeking new directions to peace by being imaginative, having some fore-sight, mixed with perhaps a naive form of altruism, is all that is left to achieve peace that we all need do much.

The Arab Spring has not achieved a real and democratic change as was hoped in the beginning. The blame must be laid on the doorstep of the politicians who have replaced the dictators.

Returning to Israel's and the Palestinians' inability to enter peace negotiations. Both sides lack a leadership that could get negotiations started. Both sides have unimaginative politicians that are unable to put new ideas on the negotiating table. Both sides have preconditions despite Israel's claim to the contrary. Building settlements instead of agreeing to freeze them in the occupied territories is no less than a precondition of the Palestinians that demand Israel's withdrawal to the 1967 borders as was before the Six Day War.

Both Israelis and Palestinians desire peace. It is the people that desire peace more than the politicians. The politicians bluff the people with promises but at the end of the day it is the same conflict that shatters the hopes of both peoples for peace.The people on both sides must take the initiative by reaching out to each other. This can be done using the Internet and its social applications such as Facebook.  If politicians use this media to reach out so can we, the ordinary people, do the same.

Peace and dialogue can be achieved by seeking ways of cooperating in the cultural fields. An outstanding example that comes to mind is the use of music as a facilitator. Daniel Barenboim, the famous Israeli-Argentinian pianist, and the late Edward Said, a musician in his own right, had put in a great effort to instill love of classical music into a mixed Palestinian - Israeli Orchestra. This orchestra performed concerts together. Another example is the cooperation between Israeli musicians of North African origin and Arab musicians that has proved to be a great success. These mixed groups should be encouraged to perform in Israel and Palestine on a wider scale. This would go a long way in bringing both sides together. The more bonds one creates in various cultural activities, the easier it will become to breach the gaps that exist. Palestinian literature should be made more freely available to Israelis and vice verse.Music expresses happiness, sadness, drama and tragedy. Music can express human emotions, which are universal. This could be a starting point. How did the US and Communist China, who were sworn enemies, under the Richard Nixon era get together? It was the result of a table tennis match.

Common interests rather than differences bring people together. Politicians divide and brainwash people to demonize another people as in the Palestinian-Israeli Conflict. They are the facilitators for unrest, hate and lack of trust. The motivation of politicians is their own prestige under guise of serving their country and its people. Politicians should be our servants as we put them into power. Once they are in power, we become their servants. They create the mess and conflict. The leaders in power should be carrying out the people's desires in achieving peace. The catalysts for peace are the arts that are a common expression for both sides. Music that reflects a common Oriental Jewish - Arab culture has great potential for achieving peace. In the Arab countries, where Jews had lived for centuries, there was a great overlap of cultures each contributing to the other. This was never the case in Christian Europe 500 - 600 years ago. The potential is there to begin the process of peace negotiations between the two parties as they have more in common than what divides them.

The Refusal of Professor Stephan Hawking 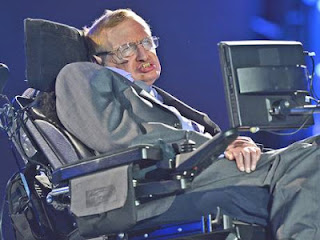 It is a great disappointment to all of us that Professor Stephen Hawking has bowed to pressure from Palestinian academics not to attend Israel's Presidential Conference. Professor Hawking is a genius and has affected our way of thinking on the cosmos, physics and mathematics. His brilliant mind, powers of deduction and logic, will always be his legacy for all mankind.

Something has happened to his logic when it comes to attending this conference. Why has his sense of logic that has served the whole world of cosmology and science failed him in this case? He has been to Israel a few times and has always received accolades here.

It is possible that he was under pressure from Palestinian academics, who support BDS (Boycott, Divestment, Sanctions) and Israel's total destruction. This comes from Prof. Norman Finkelstein, a controversial severe critic of Israel as illustrated in the video clip linked.  It is surprising to all of us that Hawking does not realize this or maybe he does.

It is obvious that academic freedom does not exist in the Arab states as it does in Israel. There is no apartheid in Israel and the Israeli Universities have many Arab students and lecturers. Some are even heads of departments and professors.

When one visits an Israeli hospital, one meets many Arab doctors, nurses and pharmacists, who hold senior positions and in many cases are heads of departments as well. (My boss is an Arab Muslim pharmacist - a situation that would never occur in apartheid South Africa before ANC took over power) Most pharmacists in the sick fund clinics and pharmacy chain stores are Arabs. They also excel in other academic spheres such as law and the teaching profession.

The illegal settler policies of the government, with its building policies in the occupied territories, are deplorable and unjustified. Many previous posts of mine are devoted to this subject and I shall not dwell on it here. Suffice it to say, a distinction must be made between the occupation and academic freedom in Israel. Academic freedom in Israel exists and nobody is prevented from attending congresses because of the country from which he comes.

I have been to meetings in this country where Palestinian academics have been invited to participate and address us on topics of which they have expertise.The security situation in Israel is very sensitive because of Islamist Jihadi extremists from Hamas and its allies that wish to infiltrate for the purpose of committing terrorist acts against Israelis. Palestinians, who come to Israel, undergo security clearance and this includes Palestinian academics unfortunately. However, Palestinian academics do get permits to participate in seminars and congresses. It is NOT apartheid, just a matter of security because of terrorist threats that have decreased significantly as the security forces are more beefed up these days than in the past.

If only the security checks were unnecessary. It would be wonderful were there an open border policy between Israel and Palestine so that both peoples could enjoy what each population group has to offer for the common good of both Israelis and Palestinians.

Even Hawking relies on Israeli technology such as the Intel chip that is an essential part of his life supporting equipment and means of communication. It seems illogical when this very brilliant and logical scientist  pays heed to Palestinian academics whose goal is the "final solution" - the destruction of Israel. Apart from that these Palestinian academics keep silent on the lack of academic freedom in Palestinian Universities and the absence of human rights and democracy in their country of origin. Surely they are masters of double standards and hypocrisy. There is no other way of looking at it.

Where is Hawking, and for that matter, the moral stand of the rest of the world on the Syrian War, when innocent people are murdered in their tens of thousands on a daily basis? What about l "academic freedom" and "human rights" in Gaza under Hamas and for that manner in the PA controlled West Bank? Why is there no hue and cry on these issues? The brutality of the Syrian Bashar El Assad regime, his Iranian allies Ahmadinajad and Hezbollah of the "great Shiite humanist" Sheik Hassan Nasralla, stoking the flames of hate and bloodshed in Syria and their hope for the destruction of the"Zionist Entity" - Israel.  The world says very little about this and, least of all Hawking, who apparently has joined the ignominious group of Israeli academic bashers. So much wasted energy and for what? Palestinian academics preventing Hawking from addressing enlightened Israeli academics, most of whom are against the occupation, is appalling and hypocritical.

It would be wonderful if this brilliant professor would reconsider his decision and come to address the 2013 Presidential Congress.

Posted by Shimonzk at 7:15 pm No comments: