The Coupling of the Opposition and Ultra-Orthodox in Israel 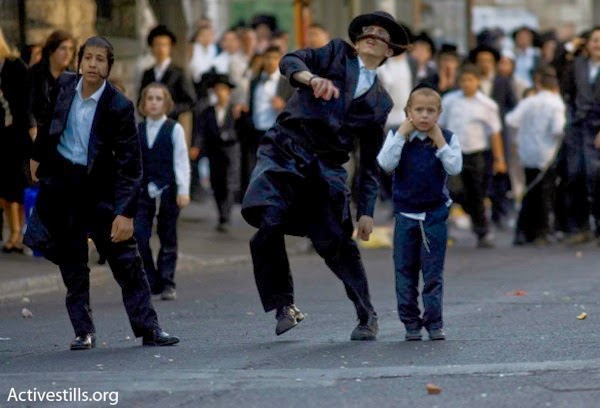 A strange phenomenon, if not a paradox has occurred in Israeli politics. It is the coupling of the ultra-Orthodox parties with the left of center Labor Party. In my previous article, I mentioned the channeling of funds from ultra-Orthodox projects to Bayit Hayehudi settlement projects in the occupied West Bank. This has created a situation where the Shas and Torah Judaism Parties are becoming bedfellows of Labor.

The main reason for this new found cooperation is that Labor is not making an issue of conscription of the Haredim into the IDF. As I said, six of one (Zionist right wing religious Bayit Hayehudi Party) and half a dozen of the other (the ultra-Orthodox non-Zionist Parties) in the coalition is not in Israel's interests. The latter is preferable, as they have no problem with a two-state solution when it comes to peace with the Palestinians, as long as the government gives them money for their partisan projects.

The compulsory ballot is another trick in hypocrisy and stealth. It is also a populist tactic. Conscripting the ultra-Orthodox males would cost Israel an astronomical amount of money as the IDF would have to establish units that correspond to their lifestyle. This is in Kashrut, Torah study and rituals. In other words, the IDF would have to bend to the religious customs of the ultra-Orthodox conscripts rather than the other way round as in the case of secular and modern Orthodox conscripts. The government suspended financing the ultra-Orthodox projects but the Bennett Bayit Heyudi are getting the finances from the government for their own occupation projects such as settlement expansion, yeshivot, headed by extremist right wing racist rabbis as well as shortened army service (1 year and 5 months for those in Yeshivot Hesder) for the right wing, Zionist orthodox conscripts. Normal length of service for 18 year old males is 3 years. So where is the equality of burden in serving in the IDF? The right wing religious Zionists in the settlements beyond he green line have never had it so good. The priorities of the present government are financing further illegal settlement while decreasing financial aid to ultra-Orthodox projects.

The settlements in the West Bank are getting increased financial aid from the government. This makes the two-state solution more complicated to achieve.

Under these circumstances, it is not surprising that people on both sides of the conflict have an increased feeling of frustration. The negotiating teams on both sides are getting nowhere. The antics on both sides are to please John Kerry without delivering the goods, each side for their own partisan reasons which do not coincide. The two-state solution is dying and before long it will enter the critical phase of rigor mortis which is the point of no return.

While the acrobatics of peace negotiations proceeds, Bibi Netanyahu harps on about Iran in order to digress from the real problems that need to be addressed. The main problems are Israel's security and the occupation. The latter is weakening Israel's stand in the world as well as its credibility and human rights record. While Israel is viewed as a colonialist power in the West Bank by its actions of building new settlements unabated, the threat to Israel's democracy will remain. Democracy within the green line exists while in the occupied territories it does not. The apartheid state similarity in the territories just cannot be concealed anymore. World opinion always sides with the victim (Palestinians) and not with the victor (Israel). While Israel remains an occupying power, it will always be under severe criticism because the settlers get all the privileges while the conquered get nothing. This is the differentiation which strengthens the slogan of Israel being an apartheid state.

It appears, from Haaretz reports, that the government is giving a large budget to the West Bank settler enterprise. This issue has been raised in the Knesset by MK Stav Shaffir of the Labor Party. This confirms suspicions that the government does not intend to freeze settlements in occupied territories. It also gives another message of "pseudo-sharing "of the national burden of conscription into the IDF. In reality, the illegal settlers in the territories will be getting increasing government aid. When ex-Shin Bet chief lambasts Netanyahu's Likud as "shallow",we should take him seriously.

Posted by Shimonzk at 8:00 pm No comments:

The latest mantra in is equality in military service. This means that Haredim (ultra-Orthodox) will be enlisted to do army service like everybody else in . Their National Insurance stipends will be cut and they will no longer reap the benefits of money from the state while they study Torah. Sounds just, if not altruistic, or in colloquial terms it is really "Israbluff".

Let us not fool ourselves into believing this. Money that has been channeled into Haredi institutions is now channeled into right-wing religious Zionist causes at their expense. The guru of these causes is the Minister of Economic Affairs and Religious Affairs, Naphtali Bennett. He is also the leader of the Bayit Hayehudi Party, an extreme right wing Zionist religious party that is not interested in a two-state solution to the Israeli-Palestinian Conflict. He also seems to have considerable support and is an important person in the coalition that pressurizes Netanyahu.

PM Netanyahu is pandering to his right wing cronies and is giving them more attention than they deserve. The Bennett, Moshe Feiglin, Danon, Akunis and Elkin factions are steering the government into a dangerous, extremist, right wing direction. The illegal settlers have never had it so good. The present Minister of Housing, Uri Ariel, who is astrong supporter of the illegal settlements enterprise, shows very little concern for housing within the green line. His main concern is accelerated building in the occupied territories and killing the two state solution.

What is worse for - money for the illegal settler enterprise and its right wing religious Zionist supporters, or the ultra-Orthodox institutions, which are non-Zionist? Both are bad for . However the former is worse, while the latter has no problems with a solution to the conflict as long as their partisan requirements are met.

The right wing are against a two-state solution and are in favor of  prolonging the occupation indefinitely. They are against a settlement freeze and wish to continue usurping destined to be part of a Palestinian state alongside in the future.

We have witnessed a massive demonstration of ultra-Orthodox communities in . The purpose is voicing their opposition to conscription into the IDF or even doing civilian national service. The amount of demonstrators who participated were estimated to be about 600 000.

The benefits given to settlers living in the occupied territories are good. They get taxation concessions, subsidized housing. Rates and municipal taxes are also less than in within the green line.

On 4th March 2014, PM Netanyahu addressed AIPAC in the US. His speech to all intents and purposes was impressive. He said all the right things that members of AIPAC want to hear. He emphasized the danger of in the Middle East and its hate of and the . It also happened that a day later, the Israeli Navy intercepted a ship with Iranian missiles destined for . This gave Netanyahu a much needed boost. Naturally denied responsibility for the shipments.

After all who are the AIPAC members? Most of them are wealthy, diamond studded, armchair Zionists with good connections in the US Administration and are unaware of the omissions that Netanyahu purposefully made in his speech. They are also ignorant of many unpleasant realities in . These realities are not pleasing to the ear or conscience of those concerned with basic human rights. Of course it is paradise compared to the bludgeon going in , , and Hamas-ruled . He never spoke about the occupation or civil rights for the Palestinians in the occupied territories not being equal to those of the illegal settlers.

He also kept on harping ad nauseam about recognition of as the Jewish State and making it a condition for recognition by the Palestinian leadership in order that negotiations proceed as if 's Jewish majority is not de facto.  No other country recognizing has that condition attached, not even and , so why the Palestinians? Is that so important? It is enough that they recognize as a state without the verbose description of its Jewishness. is listed as the State of Israel on its official letterheads and not the Jewish State of Israel. The fact that the UN recognizes as the State of Israel has not created a problem. 's leaders have not requested the UN to recognize as the Jewish State of Israel. It is obvious that Netanyahu is pressurized by the extreme right in his party. They call the tone.

There are other omissions in Netanyahu's speech. The treatment of refugees from , and does not exactly reflect the Jewish heart which Netanyahu is so proud of emphasizing. The treatment of foreign workers is shocking in many cases. The list goes on.

Young married couples have problems getting housing at reasonable prices. If they move to the occupied territories the benefits as mentioned earlier are there for the taking.

Netanyahu's speech had so many omissions that for those, who know the seamy side of , felt these omissions conspicuous by their absence.

The occupation remains a serious obstacle in reaching a peace agreement with the Palestinians as well as improving relations with the Arab world. No matter how much 's public relations campaign for being the only democracy in the , and justifying the measures it takes for ensuring its security, will lack credibility. Israel's

democracy falls short in the territories when it comes to the Palestinians. Destruction of Palestinian property by Price Tag hooligans goes unpunished. No arrests have been made. The settlers take the law into their own hands.

While the occupation and encouragement of settling in areas designated for the future Palestinian state continues, 's colonial image will remain and the Palestinians will be viewed as victims of that colonialism. White-washing this situation as well as digression by rhetoric on the Iranian threat to peace will not improve 's image. It adds grist to the mill of BDS supporters.