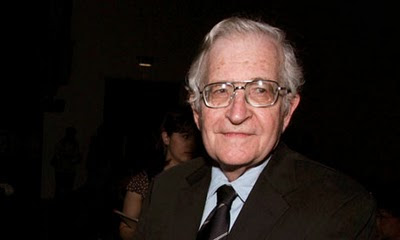 In my article' Zionism and Democratic Erosion", I wrote about the danger of the future of democracy in Israel as we drift more and more into a self-righteous mentality of the ghetto.

Many Israelis like to boast that is the only democracy in the , but when the Ministry of the Interior bans people from entering the country because of their political views then something is not right. This happened to Prof. Noam Chomsky, a linguist from Massachusetts University of Technology. The excuse being that he was invited to give two lectures at in the West Bank and would not be delivering an address at an . His views are not compatible with establishment right wing thinking which forms part of ’s government policy.

The of today seems to be moving towards the scenario as depicted in George Orwell's famous novel "1984".

Prof. Chomsky is a very controversial intellectual who attacks many governments verbally. He is radically left in his ideas and has not escaped the lashings from his tongue especially in regards to the occupation. Ok - so he is very critical of but he is no threat to 's existence nor does he deny 's right to exist or advocate terror against 's citizens. However he is sympathetic to the Palestinian struggle against the occupation. Does this justify banning him from entering ?

The only reasons for preventing foreigners from entering or any sovereign country are if they have a serious criminal record; engage in terrorism against the state they visit and its people or wish to undermine the rule of law. This is not the case here with Prof. Chomsky who has lived on a kibbutz in in the 1950s for a brief period and even speaks Hebrew.

This decision of the Ministry of Interior under its custodian, the racist and intolerable Eli Yishai of the ultra-Orthodox Shas Party, should come as no surprise!

This means that if the truth comes out that there are potential visitors coming to Israel whose viewpoints do not coincide with Eli Yishai, Avigdor Lieberman and the various ruling right wing factions ruling Israel, they stand a good chance of not being granted an entry visa. Many Israelis feel that it is a positive development.They says that "traitors are not welcome here". If you ask them what they mean by "traitors". The answer is always the same "left wingers, Arab lovers and those who disagree with the right wing ruling establishment which is security-minded and knows what is best for . After all we are under siege and our existence as a Jewish state must be preserved without allowing undue criticism which is a danger to 's existence”. This means (in their view) that those who are against the Israeli Zionist right wing are willing to compromise on 's security and seek 's destruction. The interpretation of treacherous behavior has become so wide as to become paranoid. It is sufficient to refer to this hyperlink which illustrates current right wing thinking as Ariel Eldad the extreme right wing guru writes in his article.

I have a feeling of déjà vu. The attitude that 's rulers are adopting towards those whose views are different from the government resembles apartheid of the 1960s. Apartheid labeled the opposition as communist and placed many people in prison for opposing apartheid without recourse to a lawyer. Are we in moving in a similar direction, harassing those who work for peace and oppose the occupation? In situations like this where the world is becoming increasingly hostile to its occupation policies and treatment of the Palestinians, is becoming more involved in public relations campaigns which are more on the defensive to justify its policies.

Even Boaz Okun, the legal commentator of the newspaper Yediot Aharonot which is not a fifth column Israeli newspaper by any stretch of the imagination, stated in his Monday column, that the banning of Chomsky from entering the West Bank to lecture at Bir Zeit University in Ramallah "is a foolish act in a frequent series of recent follies. Put together, they may mark the end of as a law abiding and freedom-loving state, or at least place a large question mark over this notion".

Even Knesset Member Otniel Schneller of the right wing flank of the opposition Kadima Party, made a presumptuous statement as to what Chomsky would be saying at Bir Zeit University which justifies preventing him from entering Israel at all costs. According to the "prophet and foreseer of speeches hostile to ", Otniel Schneller, Chomsky will say "that kills Arabs and is an apartheid state". In other words, Schneller presumes that Chomsky is an instigator for violence and must be prevented from delivering his lecture.

Chomsky is not the first nor will he be the last whose entry into and the occupied is prohibited. It also depends on the whims of Ministry of the Interior clerks who have mandatory powers to declare certain visitors as personae non grata on the basis of scanty evidence much based on hearsay, "speak write" (or “speak right” from Israel's perspective), or just plain rumors.

The list of people prohibited entry into will only grow. Surely from this Chomsky scenario the direction that ’s policy makers are not healthy for ensuring the future of democracy in . There is a movement towards a fascist system with a stamp of “security” justifying the erosion of human rights to reach that goal.

Posted by Shimonzk at 9:22 pm No comments:

What is Zionism or at least the original Zionism of Theodore Herzl? The Jewish People were a persecuted minority for many hundreds of years in countries of . Zionism is the establishment of a homeland for the Jewish People where they could seek freedom from oppression and live their lives without fear of intimidation. Theodore Herzl embodied this desire and he strove tirelessly to achieve this goal in his short life time. He died at the age of forty five years.

There was nothing in Zionist ideology about occupying another people or ruling them. It symbolized the liberation struggle of the Jewish People from their oppressors. Zionism was also a democratic ideology that respected human rights and dignity of all peoples. There is nothing racist about it.

Today, Zionism has lost its relevance. Unfortunately what remains of Zionism today has become the monopoly of the right wing in and this includes the Zionist religious right wing with its support of the occupation and the establishment of settlements in the West Bank and . They call the occupied West Bank, Judea and .

What remains of Zionism today is in the minds of wealthy armchair Zionists in the Diaspora who donate to because of partisan political interests including interests which are on the border of corruption and bribery in high places. Even 's political leaders are involved.

The Holyland Project, the biggest ecological eyesore in , is an extreme example of greedy capitalism in action involving all kinds of middlemen in high places in various government departments who were bribed to pass these hideous plans for ugly high rises. Even the previous Prime Minister, Ehud Olmert, is under heavy suspicions of bribery and corruption in order to make some money by dubious means. I hate to think what would happen to if there were no building freeze - more bribery and corruption involving more building of eyesores similar to the Holyland Project. Is this the new Zionism of settling by confiscating Palestinian lands and distributing the spoils amongst the wealthy elite cartels?

Are we beginning to deteriorate into a fascist state - a state with a kosher stamp of the late Meir Kahane, Foreign Minister Avigdor Lieberman and sidekick Danny Ayalon, MK Zevulun Orlev and the Shas racist Foreign Minister, Eli Yishai? Perhaps this coalition would cause Herzl, Jabotinsky, Begin and Ben Gurion to turn in their graves!

is becoming racist, theocratic and fundamentalist. Openness, transparency and tolerance are no longer a virtue. At this rate every act of resistance that is legal and legitimate today may be declared illegal tomorrow.

Recently 3000 Jewish intellectuals in Europe who have a history of being very pro are now calling for a halt in automatically supporting 's policies. The participation of Daniel Cohn-Bendit, Bernard-Henri Levy and Alan Finkielkraut in the call is very significant. They realize that the poor right wing leadership is liable to cause great harm to .

These intellectuals have called for a building moratorium in .

Some racist bills have been introduced such as the Naqba Law which has passed its first reading. Petitions to declare "Haaretz Newspaper" a terrorist or treacherous publication should be a warning of a threat to democracy which includes freedom of the press.

There seems to be a fascist wind blowing over the State of Israel. It is an evil wind containing a mix of religious Jewish extremism with a right wing occupation ideology. It also incites people by scaring them into believing that is in great danger of survival. The magic words "security considerations" are bandied about by right wing self righteous rabble rousers to justify intimidation of people whose views are too left of what is acceptable by the Israeli establishment.

Foreign workers are victims of a “revolving door" policy invented by the Israeli Government. Arab women are also victims of this policy as well as those who have not had sufficient education and are condemned to doing the most menial jobs on the market. Many of these people are forced into contractual labour and have no work security and the bare minimum of basic human rights if at all. This is a form of contractual slavery where conditions of employment by various sub contractors are shocking.

Zionism is now becoming the monopoly of extremist right wing groups in . It is composed of groups that dissociate themselves from the political left. Zionism today also includes the bigoted racist ultra Orthodox Shas Party which lately identifies with Zionism. This was never the case in the past. It further proves that the left has no place in the Zionism of today.

These Jewish French intellectuals view from the outside what the Israeli establishment fails to see from the inside.