Many incidents have occurred in which somehow gives cause for concern. This also has a great bearing on 's future as a democracy of which pundits take great pride. The well worn cliché,” is the only democratic state in the ", is questionable and relative.

There are more similarities between and its Arab neighbors than one would like to imagine or perhaps admit.

One of the great problems that exist in and this affects the personal freedom of choice of every Jewish Israeli citizen is the total absence of religious freedom. (The non-Jewish minorities in have their own religious institutions which decide on their religious welfare without interference by and are therefore in a different category for the purpose of this article). There are raised eyebrows undoubtedly at this statement. While it is true that nobody is forced to live one's personal life according to Halacha (Jewish religious laws), in practice there are situations whereby one has to rely on the religious establishment for solving problems. I shall enlarge on that later.

One of the problems in is the lack of separation between church and state (perhaps it is more accurate to say synagogue and state). This has a number of ramifications. There is no civil marriage in Israel. Mixed marriages between Jew and non-Jew cannot be performed in a civil ceremony as in most progressive democracies in the world. The reason is very undemocratic - the preservation of as a Jewish state would be endangered. Those who are not Jewish, but have a Jewish partner, whom they wish to marry, are unable to do so. This means in practice that the fear of assimilation of the Jewish people into the non-Jewish world must prevented at all costs and the separation of synagogue and state must never be considered even in its enactment as law. Judaism, like all monotheistic faiths, is not democratic. Religion by its nature can never be democratic. It has rules and doctrines which are unquestionable. You either accept it or you don't. Democracy gives you freedom of choice without coercion or ostracism. This is largely denied in the all powerful rabbinical establishment in matters of marriage and divorce.

The ramifications of this are far reaching in one's personal life as a secular or non-observant Jew. This gives the establishment Orthodox Rabbinate immense powers to influence government decisions as well as one's private lifestyle. Some of the political tools that the establishment rabbinate has are the religious ultra-Orthodox parties in the Knesset that hold political power far beyond their numbers. This is true of the Shas and Torah Judaism Parties who stoop to blackmail to preserve their fundamentalist brand of Judaism.

Now with Pesach (Passover) just around the corner, the secular Jewish community will be forced to eating "Kosher for Pesach" stamped foodstuffs. Any supermarket selling food not kosher for Pesach during the Pesach week will be heavily fined. This does not apply to food stores in the Arab villages where the situation does not apply.

Because of this religious legislation to prevent ("God Forbid") assimilation, the rabbis have immense powers and many of them have become charismatic religious leaders of the right to extreme right wing persuasion. They are supporters of the occupation and view the occupied territories as part of Greater Israel according to the will of the Almighty and that Palestinians are inferior and are not entitled to basic human rights. Their influence amongst the so-called religious community in is enormous. These people live their lives according to the rulings of these charismatic rabbinical bigots who spew hell and brimstone if they stray from the fold. Cursing is part of their lexicon towards those who do not hold their world view. The revered Shas spiritual leader and demagogue, Rabbi Ovadia Yosef, is an example. There are many others.

As we have seen over the past few weeks, rabbis with this electrifying charisma are also hiding a rather sinister side that is now beginning to come to the surface as a result of investigations by organizations such as Takana (even they are rather clumsy in their investigations). Suspicions of pedophilic practices and sexual harassment of young women prior to their marriage are becoming known. Many observant religious prenuptial brides seek the advice of charismatic rabbis, who to them are God's messengers, on how they should conduct their new marital relationship. These lecherous rabbis are not averse to giving practical demonstrations in order to satisfy their own sexual desires.

Another example is the sexual harassment of young yeshiva (religious orthodox schools devoted to Torah studies) students by their charismatic rabbinical mentors who hold high positions in the yeshiva hierarchy. Slowly but surely, the dark side of these charismatic rabbis are coming out of the cupboard as more witnesses to these pedophilic acts are revealing what really goes on.

All these incidents occur because of the extreme power that establishment rabbis have because there is no separation of state and synagogue. Here there is a close similarity to pedophilic priests and bishops in the Roman Catholic Church (and the ). No doubt this also exists in Islam wherever religious doctrines are part of state rule. is no different.

Many of these rabbis, because of the immense powers they have to prevent assimilation of the Jewish people, view themselves as God's messengers and are beyond the law thanks to the religious political parties in the Knesset who represent them. This means in practice that they have liberties and powers of religious coercion beyond what they are entitled. There are no checks and balances when it comes to rabbinical exploitation of the secular Jewish community. Secular Jews have to marry in an orthodox religious ceremony which is against their lifestyle and belief (or lack of it). Divorce has to go through rabbinical courts even for the secular Jewish community. Freedom of religion exists in name only in . Judaism in has become the monopoly of the right wing. Today is ruled by a right wing coalition. The left wing has been virtually wiped out. There is no opposition in the Knesset, apart from the Arab Parties, who have their own agenda, which does not include all 's citizens irrespective of race, colour, creed or religion. An exception is Hadash - a party that is represented by both Jews and Arabs.

A country that has no separation of church and state can never be a true democracy. This is applicable to most (if not all) Arab states and .

Posted by Shimonzk at 7:45 pm No comments:

Is Democracy in Danger in Israel? 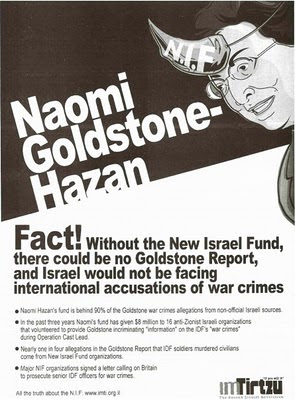 A despicable cartoon that portrays the sign of a witchhunt equating Naomi Hazan as a traitor to Israel. This is reminscent of anti-Semitic "Der Stuermer" Cartoons of the notorious Nazi rule in Germany. It is not surprising in view of much right wing thought in Israel these days.