The Demonstrations in Israel – Is it an Exercise in Futility? 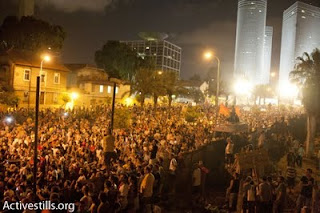 In my previous article, I wrote that the demonstrations sweeping have brought the people out into the streets in increasing in numbers. Is this an exercise in futility? Time will tell but my gut feeling is “yes”.
The end of the school holidays is round the corner. This means that many demonstrating parents - many of whom are on vacation - will be involved in buying expensive school books and raking up money to pay for the "free education" of their children.
Apart from this, the Palestinians are indicating that they intend to declare the establishment of a Palestinian state unilaterally in the UN General Assembly. As we all know, this symbolic act does not carry much weight but as a diplomatic move it will cause severe problems for resulting in its increasing isolation in the world. There are to date 130 states who have indicated support for this move.
The will use its veto in the UN Security Council if the declaration reaches this Council for the vote. This could cause problems for the Palestinians. The may decrease its financial support for the Palestinian cause. However, as the situation remains now, there is a question mark as to what tactics the Palestinians will adopt in their unilateral declaration of independence.
PM Netanyahu will exploit the Palestinian issue and re-hash the Iranian threat in order to unite the nation, thus sidetracking the Israeli people to unite against the "common threat". He will say that 's existence is under threat and this will rally all the demonstrators to support him and his government. The likelihood of this tactic succeeding is large, the demonstration and its achievements, if any, will be forgotten, and it will be business as usual. There is nothing like a call to the blood to unify the people in its support of the present Israeli Government. It reminds me of the apartheid white Government of South Africa in its attempt to unify the whites against the blacks by screaming "Swart Gevaar (black danger) from the left"!
Another reason that renders the nationwide demonstrations futile is that the core of the social and housing problems are severely overlooked. The core is based on two big problems that were hardly mentioned:
1. The occupation, including continuous building of subsidized houses in the territories. Apart from being morally unjustifiable to build on Palestinian land it requires an IDF presence to protect the settlers which is a drain on 's financial resources.
2. Housing for ultra-Orthodox religious Israelis, who spend their time studying Talmud and Torah and do not work. This community of parasites is given money by the government in coalition deals with the religious Shas and Torah Judaism Parties.
Most of the demonstrators are right wing supporters anyway. They are politely requesting the right wing government to change their priorities and solve their housing and cost of living problems.
This will never happen. The focus of the demonstrations should be to call for elections to rid the country of the insensitive right wing government and elect a new government that will change its priorities and move away from tycoonization and swinish capitalism.
All that we are witnessing now is a request for the leopard to change its spots rather than changing the government through the ballot box. This so called steering clear of hot potato political issues weakens the demonstration's cause and toadies to the government in the hope of improving the economic status of the middle class. This will not occur.
What has the Netanyahu coalition done? As expected, they have established a populist, impotent commission to alleviate the expensive housing problems. It will be headed by Prof Manuel Trajtenberg, an economist.
While the occupation and religious party extortion continues there will never be a solution to the housing crisis or the disproportionate expenses. Israelis will continue to pay for the high cost of food basics, education, and childcare.
The demonstrations should be for a change of government rather than a request that the same government should change its ways. Surely this is a non-starter for change if not futile.
If the demonstrators go out of their way to avoid political issues such as the occupation, discrimination of non-Jewish minorities, preferential treatment of the ultra-Orthodox communities and the illegal settlers in a bid to maintain the coalition of the most divisive and racist government in Israel's history, then the country-wide demonstrations are due to fail, as its message of social parity is really applicable to the Jewish majority only.
The demonstrations gave the impression of a carnival like atmosphere with the appearance of performers and singers pulling the crowds out into the streets. There were even visits by Likud Knesset members to the tent encampments expressing support. This is a paradox and weakens the cause. In any case, Netanyahu knows that his grassroots support remains intact. If elections are held now he will still win. He knows that the issues in the international arena will unite the country and reinforce the ghetto mentality of most Israelis to maintain the status quo.
In reality there is no Israeli summer. It is just a temporary success.
We must remember that the fight for social justice must be all embracing. Under the Netanyahu Government, it is sectarian and exclusive. It is hardly applicable to Palestinians with Israeli citizenship, not to mention Palestinians in occupied territories. This government must go so that social justice can be applicable to all. These are values worth supporting. It can never be achieved under the racist Netanyahu-Lieberman-Barak axis. THEY MUST GO VIA THE BALLOT BOX BEFORE THESE IDEALS ARE ACHIEVED! Peace will never be achieved while this axis remains.
An occupying power that has sectarian interests can never achieve social justice even for their own electorate. Not to mention the Israeli Arab Community.

Posted by Shimonzk at 9:38 pm No comments:

July and August are the hottest months in . The temperatures are in the mid thirties to forties with an uncomfortable humidity of close to 70%. Tempers are frayed and people are feeling the heat.
Many people are on holiday and public places are overcrowded. "Tent cities" within the main cities have sprung up like mushrooms - beginning in Ave Rothschild in Tel Aviv and spreading like wild fire to the periphery, Jerusalem, Haifa, Ashdod, Ashkelon and Kiryat Shmona as more and more people of every political viewpoint rally in unison to demonstrate.
It started as a protest against the outrageous rental prices making it almost impossible for young people to rent apartments. It then snowballed into including social and economic gripes of almost every sector in the country. is in the midst of a doctors' strike, this issue has joined up with the protesters, whose salaries, and living expenses for basics is not commensurate with their earnings.
In the coming weeks, the protests will reach its zenith and the disruption of traffic will increase. Mothers wheeling their babies in prams of all sizes joining the fray, protesting over the high cost of disposable diapers, alternative milk formulae and crèches. The salaries are not keeping pace with the increasing cost of living.
The Histadrut (Trade Unions) have joined the demonstrations and this could herald the end of the protests. The protests are justified and are deserving of our support. The partnership of the Netanyahu coalition and wealthy tycoons has produced a heartless capitalism, insensitive to the struggling middle class which are being forced into eventual poverty. The wage earner who works in factories and contract laborers will have it even worse, especially foreign workers who have almost no representation at all.
It is absurd to say that the struggle is non-political. It is political as it is the result of deliberate neglect of the salaried employee by not only the Likud coalition but also the preceding Israeli governments. It is just that the situation deteriorated further as the distribution of wealth became more unequal thanks to the tycoonization of the Israeli economy and adoption of the maximum greed that capitalism has to offer.
has a monstrous dinosaur in its midst which retains all the land that can be released at the pace of a slow intravenous drip keeping the prices high at the will and whim of tycoons with their greedy profit motives. The awful burocratic institution that ensures high prices is the Israel Lands Authority. This cancer keeps the prices high - a boon to tycoons who can buy this land as it is released for high prices and reselling for massive profits for even higher prices. This is the one side of the coin. Here we have a perfect example of a lucrative partnership between the various Israel Governments and the tycoons. The victims are the citizens of who find it almost impossible to purchase or rent an apartment at reasonable prices.
Another factor that keeps the prices high of almost every commodity is the occupation. The expense of maintaining the occupation is astronomical. The IDF has to be on the alert to maintain this illegal and immoral enterprise is astronomical. A government that screws the Palestinian people will eventually screw its own citizens. The price for denying the Palestinians the right for an independent state will be paid for by Israeli citizens in increased taxes, higher prices for essential goods and general cost of living expenses.
Despite these demonstrations, we must bear in mind the looming of September and the unilateral declaration of a Palestinian state in the UN General Assembly. Netanyahu will exploit this as a threat to 's existence, thus throwing the ball into the hands of the Histadrut. The Histadrut will then fall for Bibi Netanyahu's ruse and withdrew its support for the demonstrations. The protests will decrease in intensity, things will return to normal, and it will be business as usual with hardly a dent to support of the occupation mongering Netanyahu coalition.
The settlers who live in occupied Palestinian lands get subsidies from the government to build. The claim that all the protests are non-political is insipid. What is happening is very political indeed. All political parties are using the demonstrations for their own advantage. Yesterday we witnessed two right wing louts - MK Michael Ben Ari and Itamar Ben Gvir exploiting their own racist causes. They made a call for increasing settlement in the occupied territories as a solution for the high rentals and cost of living.
The “non-political” demonstrations are no threat to the present government will achieve very little if anything. The leadership of the demonstrations even stated that that they do not seek the downfall of the Netanyahu coalition. On Saturday evening 6th August 2011 there were over 300 000 demonstrators in the streets of Tel Aviv including other cities and towns in .
It is unlikely that this will change the political power in apart from giving it a bit of a shaking.