The Relevancy of Pesach of Today

Pesach (Passover) is here and apart from gorging ourselves to the hilt and reciting the Haggadah to celebrate the liberation from the slavery of the Israelites from Pharaonic Egypt over 5 000 years ago, much has happened to the descendants of the Israelites over the centuries. 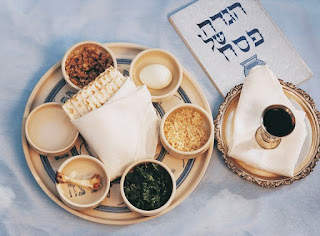 Most observant Jews in Israel and in the Diaspora will be sitting down to the Pesach meal or Seder with all its symbolism of freedom from slavery in Egypt. The Haggadah is read before the Seder meal. Many feel that it is archaic and lacking in relevance. The reading is rushed through rapidly as it becomes a tedious exercise in resilience.

While very few even think of Pesach from a wider more modern viewpoint and are so involved in outdated rituals as to what is Kosher for Pesach and what is not. The religious hair-splitting explanation over what is “kitniyot” –“legumes” that are forbidden to be eaten by religious Ashkenazim.
We should be giving more thought to those who are still not free in countries that deny their citizens' basic human rights.

We should also be sensitive towards the Sudanese and Eritrean refugees in our midst and cease using the term “infiltrators” to justify their deportation from Israel to strange countries, whose inhabitants share their skin colour and nothing else - not language, not culture probably not even religion. They have suffered endlessly in their countries of origin and their lives
are endangered there. They arrived in Israel to seek a better life for themselves. We should not be concentrating on “ghettoising” them in South Tel Aviv, where they are not even given work permits. They should have been allowed to live in other areas in Israel where they can work. The alternative to deportation is incarceration in prison for an indefinite period. Is this the new hospitality to the “stranger in our midst”?

The latest statement of the Sephardi Chief Rabbi of Israel Yitschak Yosef (son of Rabbi Ovadia Yosef of which more is written later in this article) referring to black people as monkeys.

The migrant and foreign workers, many of them coming from the Philippines, India and Thailand are contract labourers. The caregivers of our aged are on duty 24 hours a day and 7 days a week. While these people get free board and lodging from their employers. Time off is a gesture and not compulsory as there is no law to protect them from exploitation. Many caregivers do other chores in the home and do housework which is not part of their contract. They also do Pesach cleaning for the family.

I guess this is how we celebrate our freedom from oppression according to the teachings of the revered Late Rabbi Ovadia Yosef, who said that the "goyim (strangers or non-Jews) were created by God to serve the Jews".  This "sage" has made many hurtful, racist statements in the past. This explains many paradoxes in our treatment of "the goyim". Sources in Judaism seem to back this up. If a contracted foreign worker's work permit expires, come hell and high water, he /she cannot renew the work permit under any circumstances.What about the situation of asylum-seekers whose future is a perpetual exile? It is a matter of time before the Israeli Immigration Police sniffs them out and deports them to a detention centre awaiting expulsion from Israel under demeaning conditions. They live in fear as this could happen at the whim of an unscrupulous employer or informer (“shtinker”).

The following Passover supplement was created by Rabbi Burton Visotzky and Sarah Beller to find relevance in the celebration of Pesach today:

"WE ARE TROUBLED when we see fear and hatred toward “the other” in Israel. In our beloved Israel, it is sadly common to encounter fear and loathing of “the other” with whom we share the land. Even in times of turmoil and insecurity, we must strive to empathize with our neighbours and treat all with dignity. We must commit ourselves to working together with Israelis and with Palestinians to realize a future of freedom, justice and peace.

LET US STRIVE TO LOVE THE STRANGER and journey toward our Promised Land. Tonight, as we reenact our enslavement and celebrate our freedom from oppression, let us work toward loving the stranger, treating all with dignity and equal protection. Only then can we truly inhabit our Promised Land and reach the future we wish to see.

WE REMEMBER when we were strangers. Tonight, at our Seder, we remember when we were strangers. We recall the Exodus from bondage and reaffirm our memory that we were once the dispossessed, the immigrants, those who fled from the lash in the hopes of finding our way to our Promised Land. We remember countless times in the Jewish story when we have pushed away, wandering, vulnerable, even hated. Why do we tell this story year after year?

WE ARE TROUBLED when we see fear and hatred toward “the other” here in America. In the United States, we sit down to our tables at a time of unprecedented anti-immigrant and xenophobic sentiment, Islamophobia and the stirring of hatred towards those who look different than us. We remember tonight that once we were proud to call ourselves a nation of immigrants."

We, in Israel, witnessed a real “general electoral trial circus”. Was it “to be or not to be, that is the question?” The reason for holding the elections was the Conscription Bill that the ultra-Orthodox Parties in the Knesset opposed. Defence Minister Avigdor Lieberman, who supports compulsory conscription of the Haredi (ultra-Orthodox) youngsters to the IDF and as a result the government nearly fell with the threat of early elections.

A compromise was reached and the threat of early elections passed with plenty ado and the ruffling of some coalition feathers and perhaps a sigh of relief from the opposition with the exception of Meretz.

It was unclear as to whether beleaguered  PM Netanyahu supported the idea of early general elections or not bearing in mind the various suspect criminal files against him. In any case, the past few days was a charade if not a political circus.

The message that this political charade and Knesset filibuster brought to the public is the tremendous powers that the parasitic ultra-Orthodox parties have over the coalition. These parties have great potential of blackmailing any coalition of which they always manage to be part.  The contribution to the wellbeing of Israel is not the priority of the ultra-Orthodox parties. Their agenda is very sectarian especially when it comes to financially feathering the nests of their parasitic yeshivot, which has zero contribution to the State of Israel. Their youngsters are discouraged from serving in the IDF and the extremist Lithuanian cult in their midst hold massive demonstrations against those who serve in the IDF. The few ultra-Orthodox youngsters that do serve in the IDF are ostracised and in many cases are dealt with violently by the extremist ultra-Orthodox sects in their various communities.

It is a disgrace that the ultra-Orthodox parasitic bunch of scoundrels and blackmailers in Yahadut Hatorah and Shas Parties have tremendous powers far beyond what they deserve. They can cripple any ruling government on a whim. They do everything in their power to prevent their yeshiva students from serving in the IDF and doing their national duty.

“In 1953, as a part of the “Status quo agreement” which was meant to create a stable coexistence between religious and secular elements in Israeli society, the Personal Status Law was passed. Under this law, all issues of personal status were passed over to the exclusive control of the Orthodox religious establishment. This has created enormous tensions within Israel since all sorts of different groups feel marginalised and unrepresented in issues of personal status. Many groups, such as Ethiopian and Russian immigrants, have suffered what they perceive as almost wholesale discrimination and humiliation at the hands of representatives of the Orthodox establishment.” from The Role of Religion In Israeli Society

There is no doubt that the establishment ruling Orthodox Rabbinate has caused much pain to those, whose Jewishness is in doubt according to their interpretation of Halacha. The Chief Rabbinate of Israel also blacklists Diaspora rabbis 1. What right do they assume in doing this?

Establishment Orthodox Judaism in Israel has become more extreme and less tolerant over the years. There is a dearth of so-called Zionist right-wing rabbinical bigots, who make disparaging remarks about women serving in the army. What right have they got to interfere with the decisions of the IDF as far as women conscripts are concerned? These bigots have taken it upon themselves to be the watchdogs of morals pertaining to their hell and brimstone-style of Judaism.

These establishment rabbis, whether Haredi or right-wing Zionist Orthodox are driving a wedge within Israel’s society. I have asked myself if these rabbis have anything to contribute to Israel apart from their narrow world view and their desire to manipulate the naivety and ignorance of many observant Jews. This is where their power lies! They are political, divisive, despicable and hungry for power, influence and financial enrichment. The Chief Rabbi of Safed, Shmuel Eliyahu 2 is an example of a rabbi with a narrow, racial worldview. Unfortunately, there are quite a few of them with his philosophy. He also ruled that rape in war is justified.3

The time is overdue for separation of Orthodox Synagogue and State. Prolonging the unhealthy situation of establishment Orthodox Judaism that encroaches on personal freedom of the Jewish People in Israel to be secular, Reform or Conservative with the freedom to have civil marriages as well as recognition of non-Orthodox rabbis to perform marriages according to the desires of their adherents.

Israel's Chief Rabbinate and Corruption are Blots on Israel's Democracy

Posted by Shimonzk at 7:24 pm No comments: